Tales from the Archives: The Original Adventure Entertainment - Chapter Fourteen.

Chapter fourteen.
a murder in homburg.
In which Our Heroes attempt to recover at a Spa but their hopes of relaxation
are foiled by a Dastardly Murder. 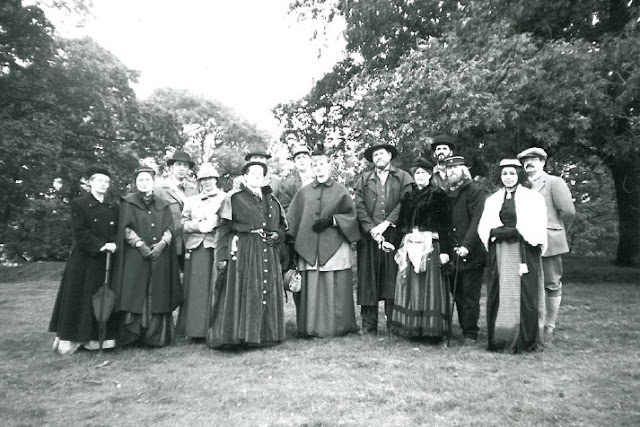 About to set off for their morning stroll

Not in the Daguerreotype:
Herr Emmanuel Neumann - A Bavarian “Commercial Traveller”, allegedly
(by the time this image was taken, he was sadly deceased)


After failing to get any actual rest during the excitement in Transylvania, Ruprecht, Ritter von Schlan was allowed a few weeks leave to regain full health before taking up his new diplomatic post in Mainz. He decided that the fashionable seaside spa at Homburg would be a fine place to visit. He could recuperate and make new contacts that would benefit his new position. Thinking of the social scene and casinos, his friends happily joined him there. 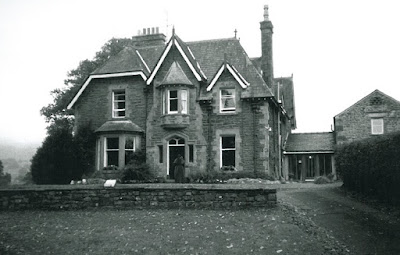 They arrived at the hotel on the edge of a park in Homburg and settled in. During the evening, our Coterie of heroes relaxed, playing cards and discussing their plans for the following morning. 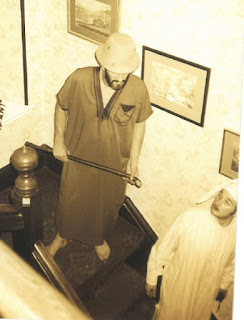 During the night, the Gentlemen investigated
a disturbance in the hotel
but found no signs of anything untoward.

After breakfast, our friends were shocked to find the cause of the night-time noises and to hear of the fate of Herr Emmanuel Neumann, a Bavarian “Commercial Traveller”, who they had met the evening before. Herr Neumann had been discovered foully killed! Ushered away from the murder scene by the local Police, our party finally decided to follow their original plan to go for a stroll in the nearby hills.

Whilst out on the walk, Captain Montgomery, Sir Pelham Kimberwicke and Monsieur LeBrun discussed the formation of a private high speed Aerial Packet Service making use of dirigibles powered by LeBrun’s prototype airship rocket motor.

Also en route, Baron Dunkelheim collared various members of the group. He was endeavouring to raise funds for a bold bid to conquer the, as yet, un-ascended western true summit of La Meije, “the Grand Pic”, the last major peak in the Alps which had not had climbers reach its summit. If he was to succeed with this expedition early next year, it would almost certainly allow him to win the election for the President of the Vienna Explorers’ Club in the Autumn of 1873. 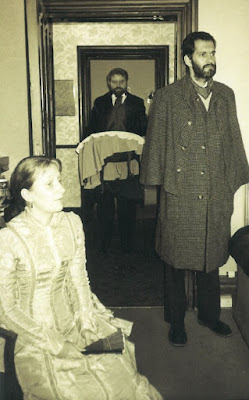 
Scheuringer then went to search the rooms of the absent pair which he found were bore no traces of anyone actually staying in them. The two guests had either not occupied the rooms or has left abruptly., having carefully removed any evidence, and without checking out . Questioning the hotel reception staff revealed that they had spoken German with a very slight French accent and had claimed to be from Alsace.

On their return to the hotel, they found the Police investigation was ongoing. Inspector Scheuringer called everyone together to question them.

The Inspector checked through the guest register at the hotel and his men tracked down all but two of those staying there. He began to interview each resident of the hotel individually to establish their alibis. 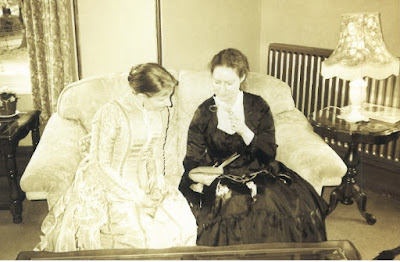 Our heroes resolved to investigate the murder independently of the Police. They started to gather the clues they had found between them.

By bamboozling a Police constable, they had already managed to ascertain that Neumann had been stabbed and that he had a return ticket to Koblenz in his wallet.

Secretly hidden in full view on one of the bookshelves of the hotel’s guest salon, they found a catalogue of the various household wares that Herr Neumann had been showing them on the previous evening. After examining the contents for a short period, they discovered that there was a strip of paper tucked down the spine binding of the book! It was a list of numbers and the name of a merchant ship, the S.S. Rose of Cobh. Inquiries at the Homburg harbour revealed that the vessel was not due in until the following day.

Meanwhile, Scheuringer had sent a Daguerreotype of the deceased to the Bureau for External Affairs of the Homburg Gaming Authority (Host’s Notes: An organisation that acts as this small state’s Secret Service). After consulting their extensive files, they identified Herr Neumann as an alias of Gregor O’Connell, a known smuggler and gun-runner. Significant investigation work later showed that the crates had contained weapons and had passed through several hands before reaching Homburg. Diligent work took the paper trail back to a company based in London that was thought to be a front for the Prussian Secret Service. 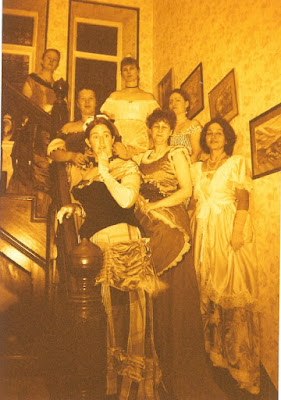 The Ladies dressed for dinner 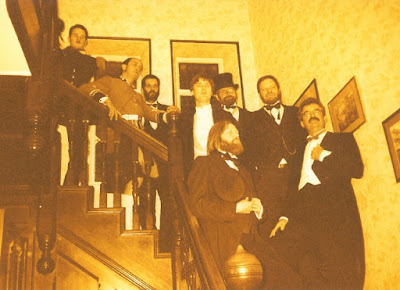 The Gentlemen dressed for dinner. 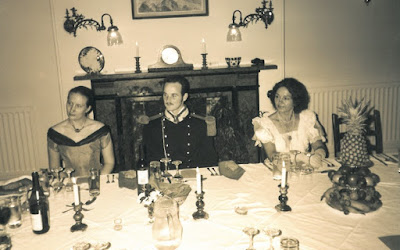 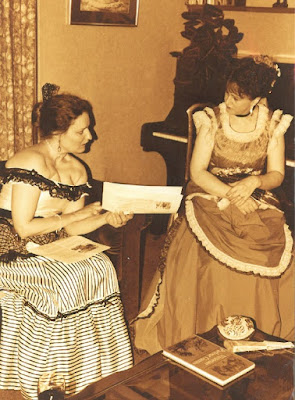 Discussing the newspaper
reports after Dinner


Reading the newspaper reports, our investigators learnt of demonstrations and riots in Koblenz, the capital of the troubled Rhineland state of Mittelrhein. Apparently, the pro-French government was under severe pressure to resign due to food shortages and high inflation. The opposition was lead by several pro-Prussian politicians and the whole situation was being watched carefully by many nations. 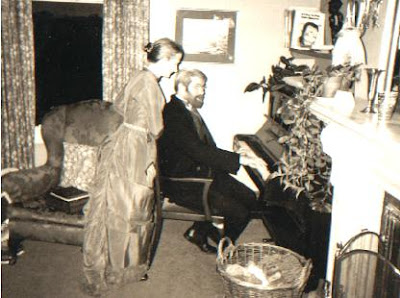 In a rather forced effort to lighten the mood of the evening, our band tried to forget the day’s tragedy for a while. They sang songs, played charades and indulged in other entertaining pastimes. 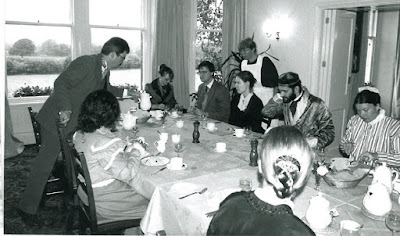 Breakfast on Sunday
On Sunday, after church, and having confirmed that the SS Rose of Cobh had indeed arrived in port, our heroes gave what they had found to the Inspector.

Whilst Inspector Scheuringer had discovered the two murderers, their identities still eluded him. His final conclusion was that they were French Agents sent to stop O’Connell supplying weapons to the anti-French factions involved in the unrest in the Rhineland nation of Mittelrhein. Unfortunately, they had evaded justice and already slipped out of Homburg and were probably well on the way to France by now.

The Police checked the contents of the slip of paper against the ship’s cargo manifest and discovered that the crates with these numbers had already been unloaded and had then disappeared!

Unbeknownst to the Homburg Police, Baron von Dunkelheim had copied the crate numbers from the slip of paper. It was he who persuaded the party to delay passing the information to the Police until after church and taking advantage of the delay he had created, he sent some hired men to collect the relevant cargo and move it to a different warehouse. He later contacted a friend, who was a Big Game Hunter, and they surreptitiously sold the weapons. This subterfuge allowed Dunkelheim to raise most of the money he required for his mountaineering expedition.

Captain Campbell carried out his orders to pass the Top Secret itinerary for Prince Albert’s next visit to Homburg to Inspector Scheuringer to send on to the Police Commandant. Neither the Captain or the Inspector suspected that Lady Power Campbell (Host’s Note: since Chapter Two “A Rendezvous in Bohemia”, Captain Campbell had married Lady Power O’Donahue) had found the document, copied it and was offering the details for sale to the highest bidder.

Frau Elsa Berg had heard that a friend of the Ritter von Schlan’s had developed a working truth serum. She wanted a sample to give to her husband in order to persuade him to teach her a spell he had previously refused to show her. After much, sometimes less than surreptitious, questioning she discovered that Fraulein Annalise Gerhardt’s father was the inventor of “Veritasin”. Frau Berg began to plan how to get her hands on a dose of the serum in the future.

Worthy of High Merit: Kim (playing the murder victim & then Inspector Jurgen Scheuringer) for his dedication to duty. He portrayed the victim for Friday evening and the body that was to be discovered before breakfast on Saturday morning. He lay in place as the body from half past six until eight o’clock when he was finally found by another player. During that time, the waitress who was laying the breakfast table came in and had a nasty early morning surprise when she came across Kim lying there! Happily, after the initial fright she realised that this was part of the ‘murder mystery’ weekend and she didn’t mention the body to anyone until the players found it themselves.

Also Worthy of Merit, were the owners of the Bed and Breakfast we were staying at. We hired it exclusively and informed them we were going to run a Victorian ‘murder mystery’ weekend. When we arrived, they told us that they had found suitable clothes for acting as Victorian servants whilst serving breakfast and dinner and prepared the meals using recipes from Mrs. Beaton’s cookery book. They took a lot of photographs and when the Inspector arrived to investigate the murder, they loved it when he questioned them along with everyone else who had been present when the victim’s body was found. They really entered into the spirit of our Larp and added greatly to the atmosphere. 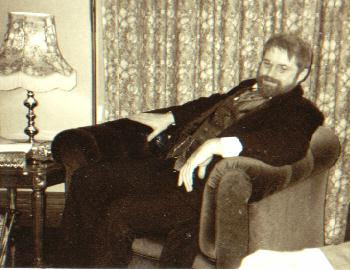 Running LARPs is fun but rather tiring :)
A chance for me to relax after the LARP had finished
Posted by Nick Marshall at 12:52 No comments: